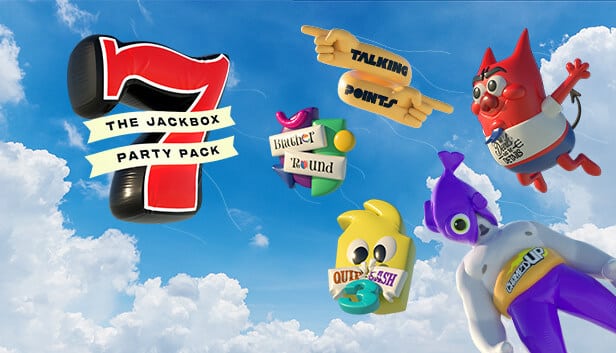 Summary of The Jackbox Party Pack 7

The Jackbox Party Pack 7 is Jackbox Games 7th installment to the Jackbox Party Packs collection. This Pack features 5 new games including; the long awaited sequel to Quiplash 2 (Quiplash 3), The Devil and the Details, Champ’d Up, Talking Points & Blatheround.

● Depth of Gameplay – Like all the previous Jackbox Party Packs, this sequel has 5 party games most of which are great for streaming – The Devils and the Details being the only one which does not work too well without having that personal interaction of an in-game voice chat.

● Enjoyable to Play – Pack 7 is probably the best pack to date. Whether you are a streamer, or just looking to play with your friends and family there is something for everyone in this pack!

● Is the Game Good to Stream? Absolutely! This is another great installment to the Jackbox Party Packs great for playing with your viewers. Unlike the other packs, this pack includes new features to help streamers keep the game safe such as moderator room codes – where moderators can join your games and remove the toxic answers.

Where The Jackbox Party Pack 7 Could Improve

Though I would deem this pack almost flawless with the new addition of moderation rooms, we still lack the ability to kick players. It would be very beneficial to be able to kick certain players from games not just for stopping toxicity but for viewer interactions. We all have that  one person who can type faster than the others who has an unfair advantage over the slower typers, we would be able to ensure a fairer opportunity for other viewers if we were able to kick those players in a nice way!

The moderation rooms are a great addition. I’m sure every streamer would agree, however it would be great if the host could take moderation actions in the game itself. A Lot of streamers when starting out will only have access to one monitor making the moderation room difficult to use without interrupting gameplay.

Should You Stream The Jackbox Party Pack 7

What you need to understand is Jackbox is way more than just a category, Jackbox is a community! They have built something special to really help this title stand out on Twitch and are always looking for new ways to do so and help connect this entire community. They even have a stream team, ‘Jackbox Streamers’, featuring streamers small, medium, and as large as Tipsytune – who has built his entire community surrounding this game to the point of partner within 2 years.

The Jackbox Party Pack 7, like the other packs, is a great game to stream. No matter how big your community, you are bound to see growth and have a really good time playing it with your viewers.

Who Much Is The Jackbox Party Pack 7?

The Jackbox Party Pack 7 is currently priced at $29.99 and is available for download on Steam, Xbox One, PS4, and Nintendo Switch.

What Are Moderation Rooms?

Moderation rooms are special rooms that your moderators can join and remove toxic/TOS answers from your game – keeping it a fun, safe place to be.