The unexpectedly famous streamer of the popular game World of Warcraft, Asmongold is both a world-renown online streamer and social media gaming sensation. A true legend, and a guild leader, Zack hold the most-watched channel on Twitch platform that streams WoW.

He is available on multiple social media platforms including Discord and Reddit. Find out about Zack Asmongold: net worth, age, streaming career, personal life, and more in this article.

World-famous YouTuber and one of the most-watched online gamers in the World of Warcraft games, Asmongold is a Twitch streamer to watch out for.

Zack, AKA Amonsgold, seems like a private kind of person because he doesn’t like disclosing his real name on public. Although he loves playing games so much, he didn’t do everything in a blink of an eye. He earned his millions through hard work and consistency, thanks to his supportive parents and siblings.

According to him, Zack loves to entertain people that’s why he chose to take on the streaming path for his lifetime career.

Asmongold started streaming in 2013. Back then, Twitch was still in its second year after its grand launching in 2011. Having been a World of Warcraft player for a long time, he became a prominent WoW streamer in Twitch over the years.

Until today, Asmongold holds a prestigious household name among Warcraft players in the entire gaming industry.

Not long after his rise in the gaming world and becoming a successful internet personality, Asmongold co-founded One True King (OTK) in October 2020 along with famous Twitch streamers Mizkif, Esfand, Tips Out, and Rich Campbell.

Although mostly known for playing World of Warcraft, Asmongold also plays other various online MMORPG and battle royale games. Here are some of them: 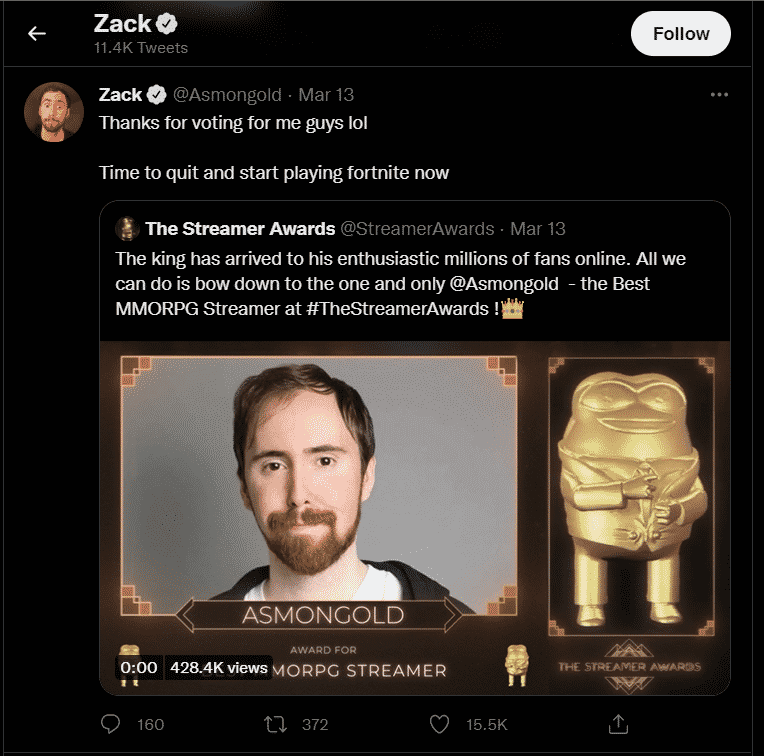 Zack proudly won the Best MMORPG Streamer Award in the 2022 Streamy Awards. He’s been really happy being acknowledged for his craft and love for the game. It is his first award in his entire gaming career.

Asmongold Net Worth – How They Made Money

How Much Money Does Asmongold Earn From Twitch?

Asmongold earns in the Purple platform through subs, ads, and donations. He has about 2.9 million followers with an average of 10 million monthly views and more than 18,000 active paid subs per stream. Considering he is a top-tier partner of Twitch (70% subs income), Asmongold should be making around $88,000 monthly, or approximately $1.05 million annually. 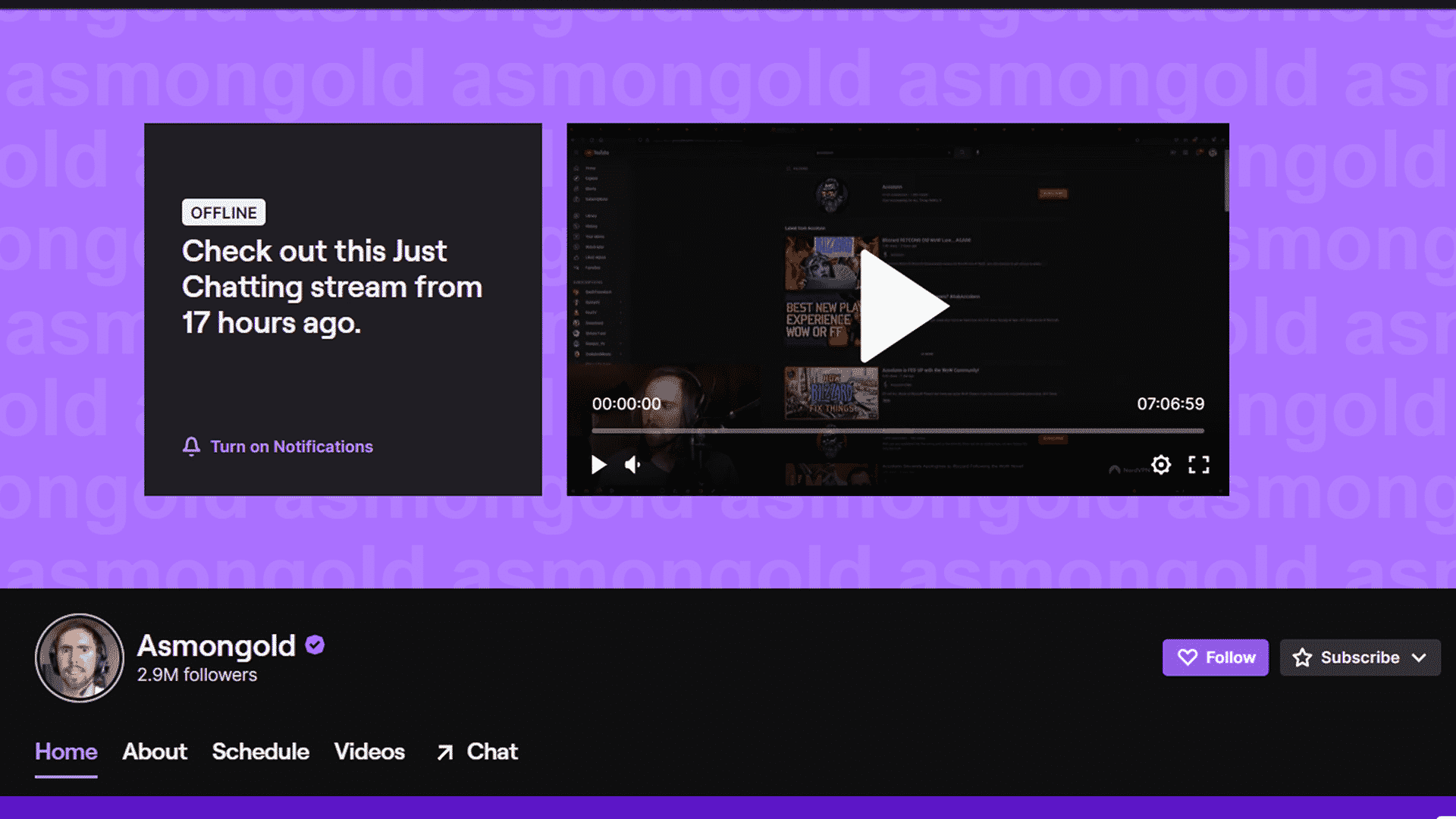 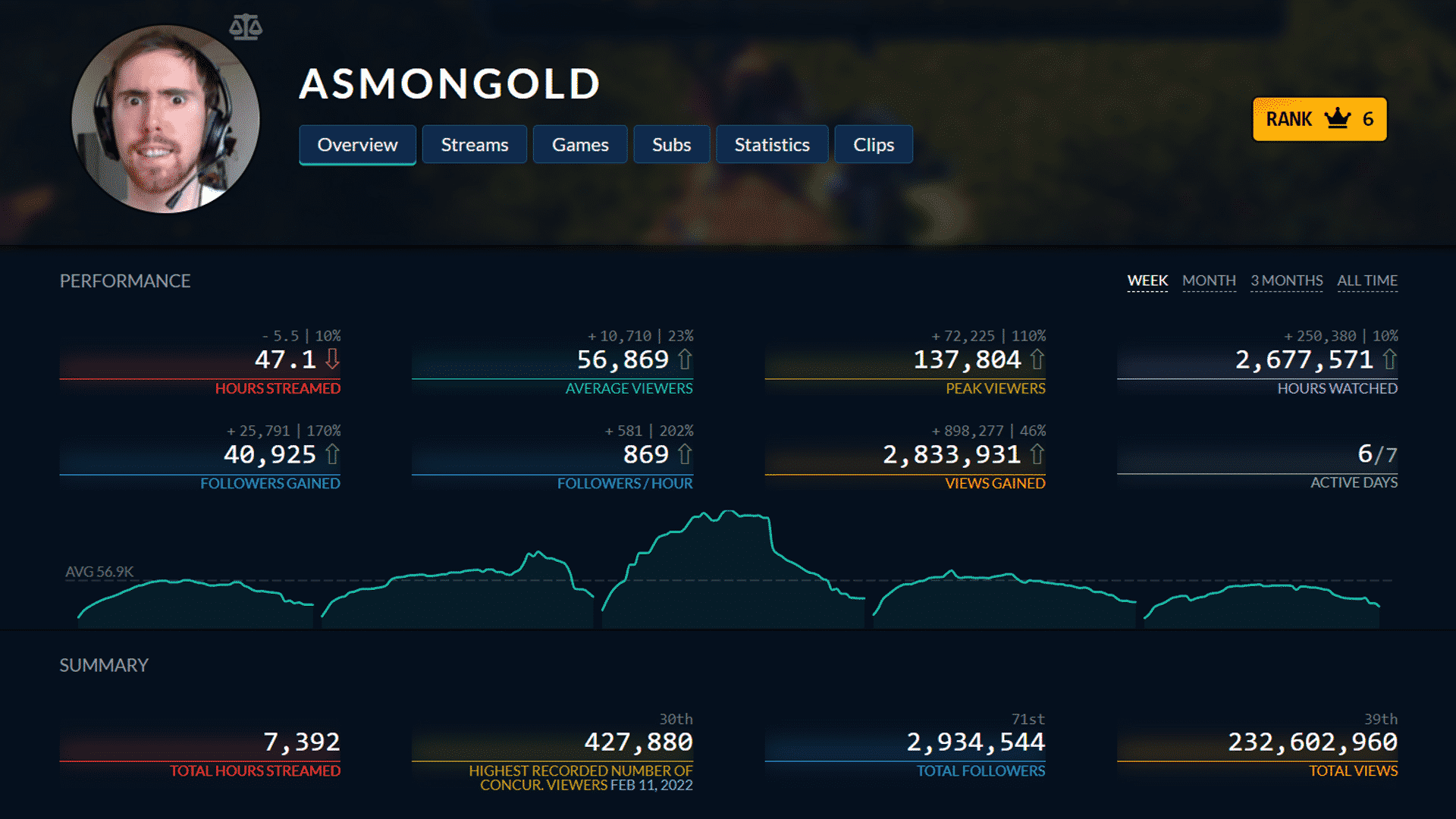 Most channels earn mainly through advertisements and exclusive partnership with YouTube. Asmongold has more than a million subscribers with a total of 571,000,000 YouTube views. These figures should be able to give Zack around $75,000 monthly income and $900,000 yearly. 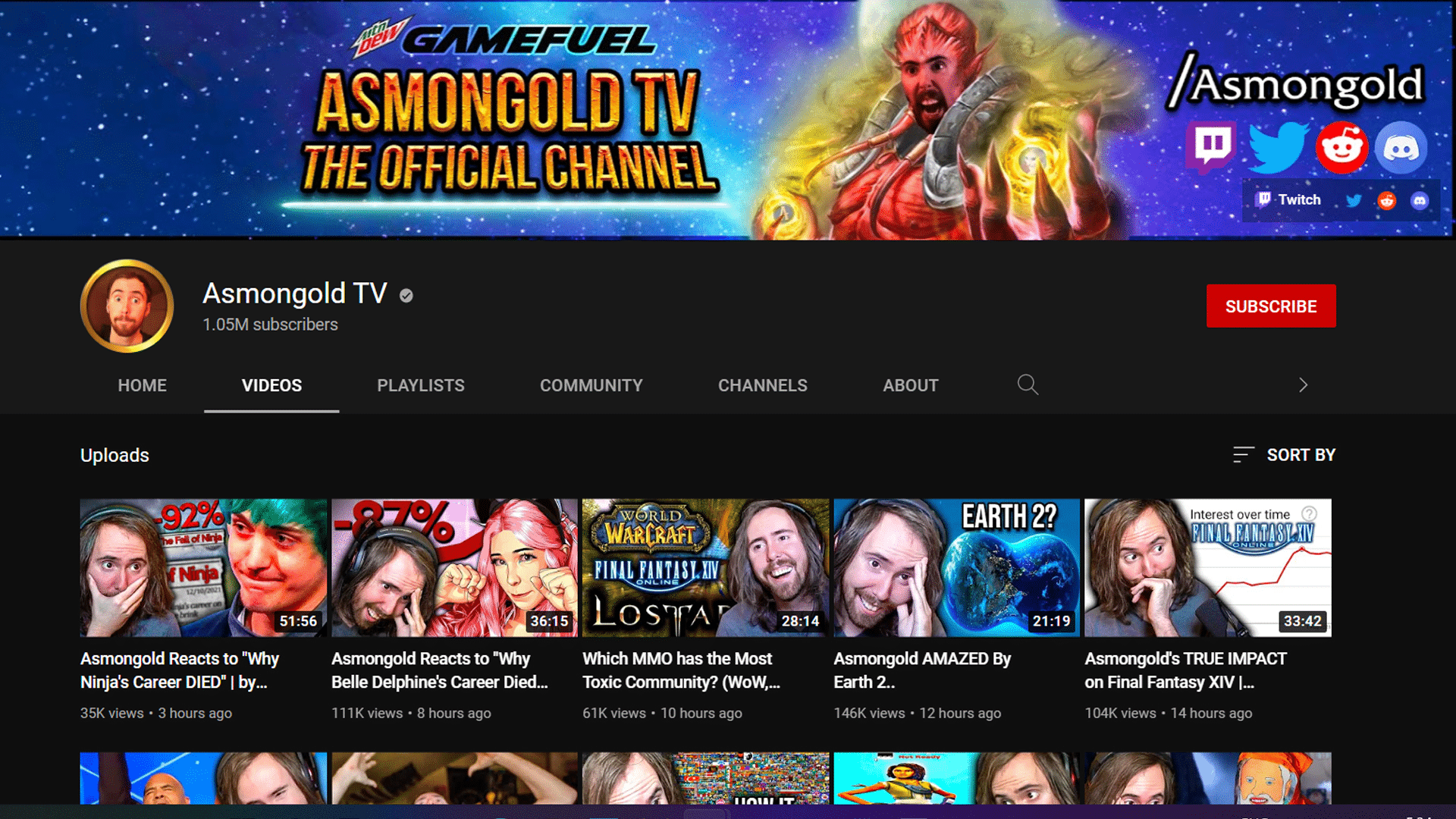 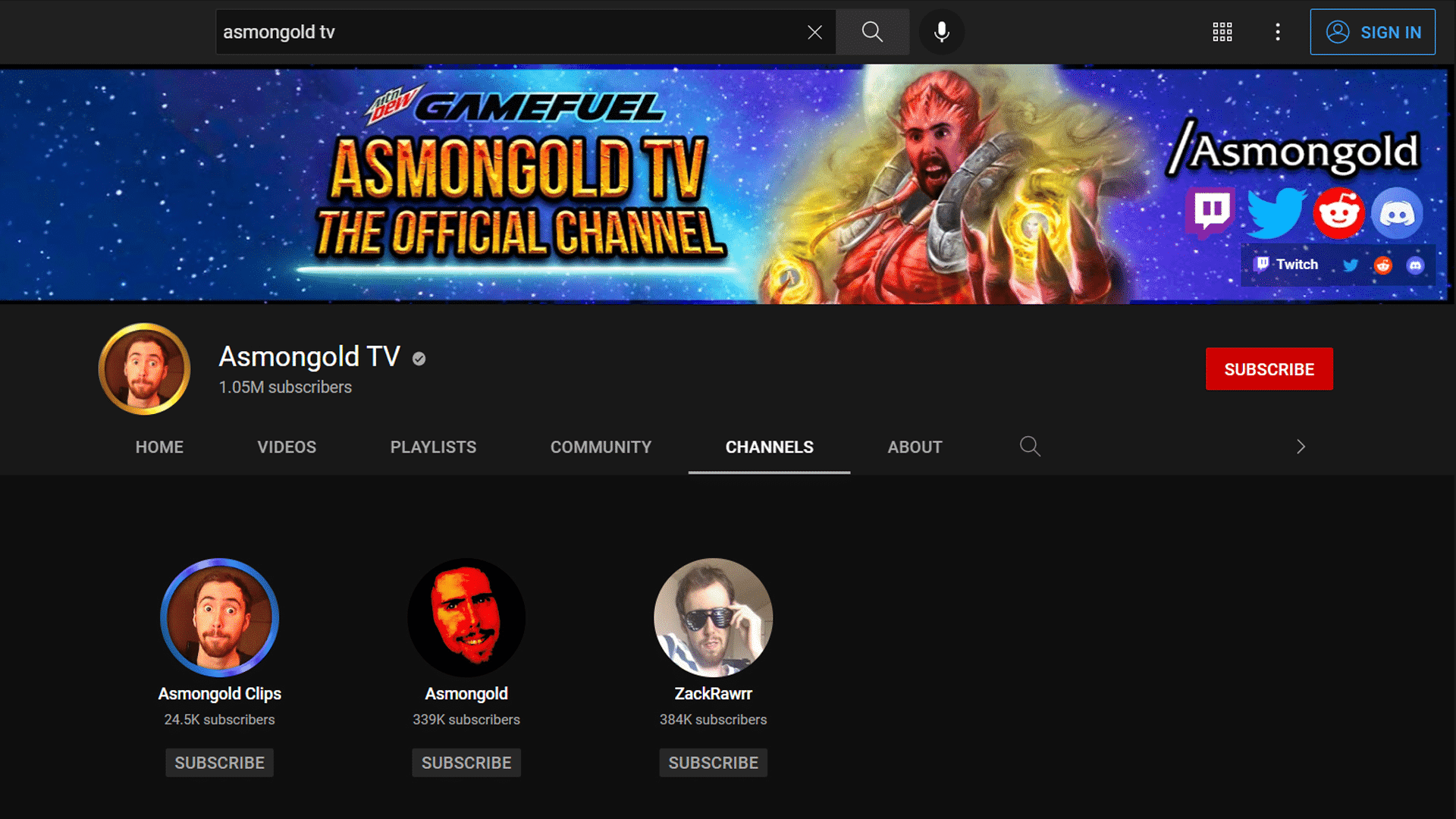 With his Twitch and YouTube earnings combined, Asmongold’s revenue should be around $163,000 every month, and $1.95 million every year.

This estimate excludes his earnings via the Twitch Cheering Feature where he also makes a fortune streaming online. This feature generates equally high income for streamers, including Asmongold.

Asmongold does not appear to have his own merch for sale. However, he has OTK merch available on a RedBubble store online and also on their official OTK Network website.

Asmongold’s major sponsor is Mountain Dew GameFuel and Chipotle. He is also part of the OTK Network which partners with Mountain Dew GFuel and Gatorade.

What is Asmongold’s estimated net worth in 2022?

As of 2021, Asmongold has an estimated net worth of $2.5 million. Moreover, with his rise to stardom and increasing income in multiple sources, he may reach the $3 million mark (or even higher) by the end of 2022.

Zack appears to be single at the moment. He dated Izzy G (aka Pink Sparkles) back in 2018 and after more than a year and a half of their relationship, they announced their break up in 2019. Fans are still asking if they have gone back together again but it already seems impossible now. 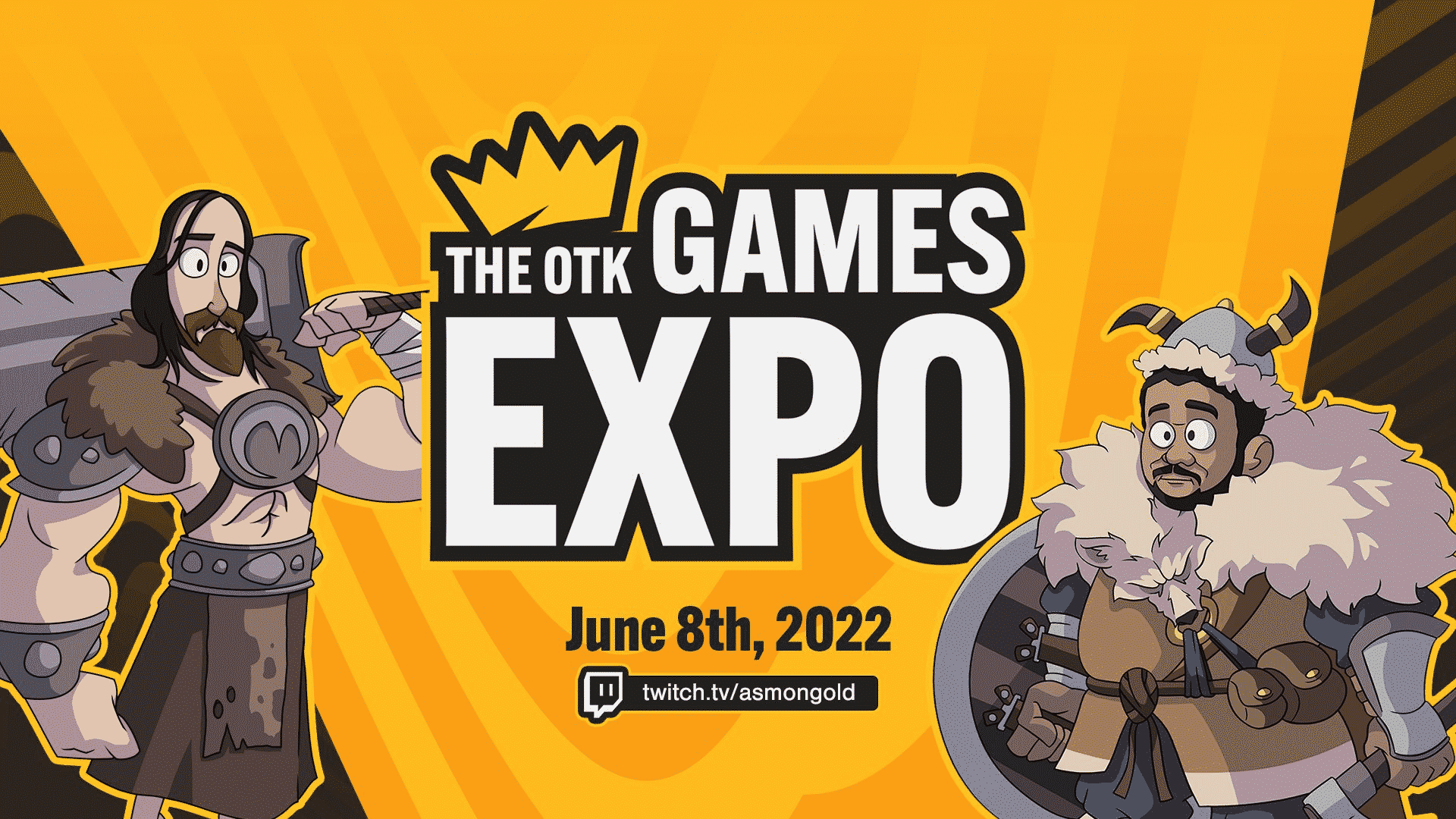 The OTK legends Asmongold, Mizkif, Esfand, Rich Campbell and the rest of the gang are hyped up for their upcoming Games Expo on June 8, 2022.

Asmongold did not rise to fame in an overnight event. He started streaming on Twitch with very few audience but still continued to stream despite the low figure of followers. He just did what he loved doing; playing and streaming consistently, and then, people started to flock around him. His genuineness in what he does influenced how his followers also see him. Being a streamer is not an easy job. You also have to put in a lot of effort and long hours in every stream.