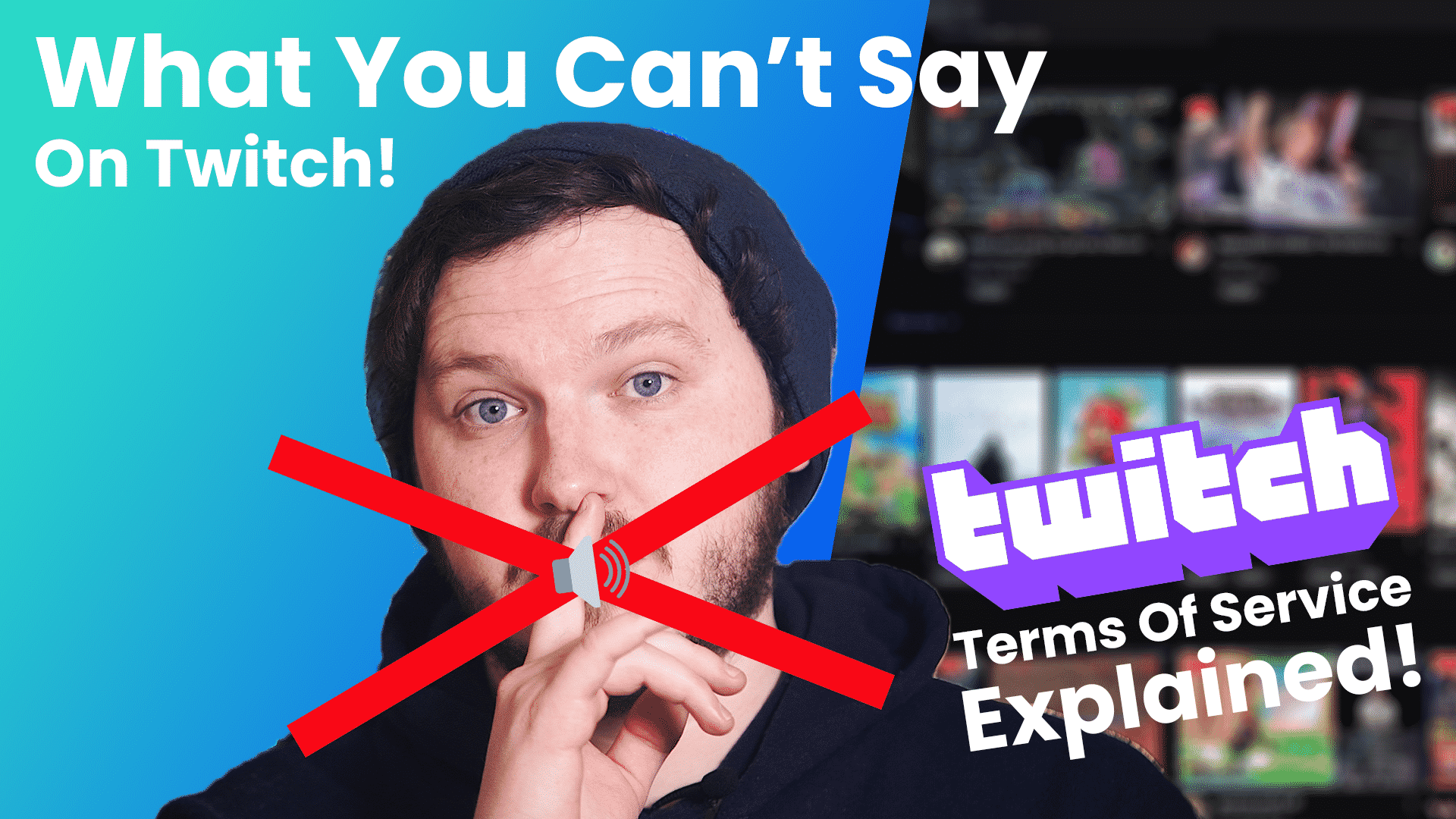 While you can get away with saying a lot of things on platforms such as Twitch, there are some topics or statements that should be avoided. Speaking in a way to cause others harm or using certain words can potentially result in a ban which could slow down your progress considerably.

User accounts on the platform can be removed if they use banned words on Twitch whether they are a streamer or not. To protect yourself, refrain from using language that is strictly prohibited. This includes hateful slurs, racial slurs, insults, violent speech, and more.

This post will cover all the things you can’t say within the Twitch community.

What Can’t You Say on Twitch?

Twitch streamers can be banned for discriminatory speech, threats to harm themselves or others, and general harassment. They can also find themselves in trouble if sharing another’s personal information, impersonating Twitch staff, or any speech with the intent of taking advantage of others.

Offensive speech is defined by words and conversations that promote or encourage discrimination. Harassment, hate speech, or violent speech that is based on the following:

Other bannable offenses include abuse against people due to their medical conditions, disabilities, physical characteristics, age, or veteran status.

Depending on the severity of the offense, your account can be indefinitely suspended even on a first offense. Your best bet is to treat everyone with respect in action and words.

Specific Words That Are Banned On Twitch

As of December 16, 2020, Twitch has outlawed the usage of the words “virgin,” “simp,” and “incel” on their platform – both in chat and by the streamer.

Twitch now says that you can no longer call others ‘simp’, ‘incel’, and ‘virgin’ as they are now against TOS, along with any emotes relating to the term simp

Twitch baby, what is you doing?

Additionally, you can no longer use the term or command !blind when you are playing through a game for the first time and don’t want any hints.

Words You Can’t Say on Twitch

One of the most common derogatory terms used on Twitch are variances of racial and homophobic slurs. Some streamers/gamers claim that they didn’t intend to offend anyone with the speech.

You don’t know who is watching. You don’t know the histories of every one of your fans. While you and your friends might realize that you are “joking,” you don’t know if certain terms or words have affected people negatively in their pasts.

If your account is suspended, you will generally have the right to appeal. Typical bans can last between 1-30 days but can be indefinite if the infringement was terrible. While many complain that bans based on speech go against freedom of speech laws, Twitch, Mixer, and other platforms are legally allowed to create guidelines and moderate chat. As corporations, they must look out for their brand. Turning a blind eye toward certain terms and phrases could bring them under scrutiny.

There are times when trolls will visit your chat. You must learn to deal with them professionally. Retaliation against them can get you into trouble. That being said, you can take preventative measures to minimize the written attacks.

How to Ban Certain Words in Your Chat

You can create your own list of banned words in your creator dashboard on Twitch by completing the following steps:

Additionally, you can customize a Twitch chatbot to help moderate your chat. Taking these steps upfront can prevent a lot of spammy trolling which will ensure that you and your community continue to have a good time.

On Twitch, there is zero-tolerance toward violent threats. Any account found to be in violation of this rule can be banned indefinitely. The rules include threatening (or attempting) to physically harm or kill yourself or others. Even if not verbally stated, the intent (even if it a joke) to intimidate others with weapons or damaging threats can get you in trouble.

If you are genuinely feeling suicidal or homicidal, we urge you to get help. Find a hotline in your country or reach out to a friend or family member who can direct you to the help you need.

Dellor got banned from Twitch for having a meltdown and breaking a keyboard over his head. While it isn’t the first time he has broken his own property, his account was suspended because it involved physically hitting himself.

While not physically violent, spreading malware or viruses misinformation (as well as anything else that could be harmful to property) can also result in a ban.

Streamers can be banned from invading the privacy of others. This includes sharing personal information or their property without their permission. It also includes filming them when they have asked you to stop. At TwitchCon 2019, Yuber walked up to a Twitch employee and started speaking to her. She asked not to be filmed, but he kept the camera focused on her and then ran away when he realized she worked for Twitch. His account received a temporary ban.

The internet isn’t always a safe place and sharing information can get you or anther person into actual danger from deranged fans with malicious intent. For that reason, refrain from letting your viewers know private information about others.

These include the person’s name, age, location, or any other identifying factors. It can include spreading personal information or messages that was supposed to be kept private or things posted on their personal social media accounts.

While you may be an open book, some people prefer to broadcast anonymously. Allow them to do so.

Your account can be banned if you spam people by repeatedly sending or saying large amounts of unwanted messages. This can be very annoying or count as harassment.

If you purposely mislead people with incorrect information about yourself, your channel, or your broadcasting platform, you can be banned.

You can also be banned for trying to scam or defraud people. Twitch and Mixer do not want to be held responsible for your malicious intent.

Lastly, if you pretend to be a representative for your broadcasting platform, you will be banned indefinitely.

If you are playing with a group of friends, let them know that you are streaming and ask them to moderate their speech. There have been cases where accounts have been banned for content that wasn’t necessarily the streamer’s fault. While these are often overturned, it is better to be safe than sorry. If one of your friends continually breaks rules, don’t play with them while you are streaming or mute them if they are in the channel.

It should be noted that breaking the rules on other Twitch services can also result in a ban on Twitch.

While this doesn’t involve your speech, playing copyrighted music or watching movies can get your account muted or banned. This is due to DMCA laws that are set up to protect the original artists of those mediums.

If you have messed up numerous times, it may be a good idea to learn how to change Twitch name. Sponsors may not be willing to work with you if you are associated with a name with bad press.

While you should always avoid using the banned words on Twitch, several lingo words can keep you as a part of the community. You can even use “Twitch-approved insults” like Malding when talking to each other on stream as long as you are not being overly toxic.