Ludwig is a well-known online personality and content creator from the United States. His work consists mainly of commentary videos talking on various issues, skits, gaming videos, and whatever else his fans may find interesting. Ludwig is a well-known Twitch streamer who recently made the switch to YouTube.

So, you’re probably asking, “How much is Ludwig net worth?” Or perhaps you’re wondering, “How much does Ludwig make?” We’ll never know the precise amount of money Ludwig makes, but here’s our guess plus some background about him.

Ludwig Ahgren is an American online personality/streamer who became the most subscribed Twitch streamer in the platform’s history in April 2021. Ludwig started streaming in 2018, and he quickly became involved in the Super Smash Bros. Melee community. Commentary for various events in funny tones makes him a fan favorite. He commented on Melee esports competitions and broadcast team members for major events such as GENESIS 6 and 7. He has also competed in Melee tournaments and hosted his own.

Ludwig grew up in Hollis, New Hampshire, and graduated from Hollis/Brookline High School. Ludwig has always had a passion for comedy, gaming, and theater, and he earned a bachelor’s degree in English literature, journalism, and mass communication from Arizona State University in 2017. Since early 2020, Ludwig has been in a relationship with Blaire “QTCinderella.” On March 14, 2014, he sponsored a subathon event with a 31-day “never-ending” stream. On April 13, 2021, he had over 283,000 concurrent subscribers.

Ludwig became a full-time Twitch streamer in February 2019, despite being active on the platform since early 2018. However, he didn’t achieve much popularity on the platform until around the end of 2019. In the middle of December 2019, he had 100k Twitch subscribers.

Ludwig had a tremendously successful year on Twitch in 2020.

Ludwig started his own Twitch Subathon in March 2021. The idea behind the Subathon was that he would keep streaming continually until the timer ran out, with each subscriber adding 20 seconds to the total. After a few days of streaming, this was decreased to 10 seconds for each sub – but the stream still lasts a long time.

The Subathon drew widespread media attention and resulted in Ludwig gaining many subscribers. He is only the fourth streamer in history to have more than 100,000 subscribers.

Last November 2021, Ludwig signed an exclusive partnership with YouTube to begin streaming on that platform. Thus, YouTube makes most of its earnings, both from streaming and adding videos to its YouTube channel. 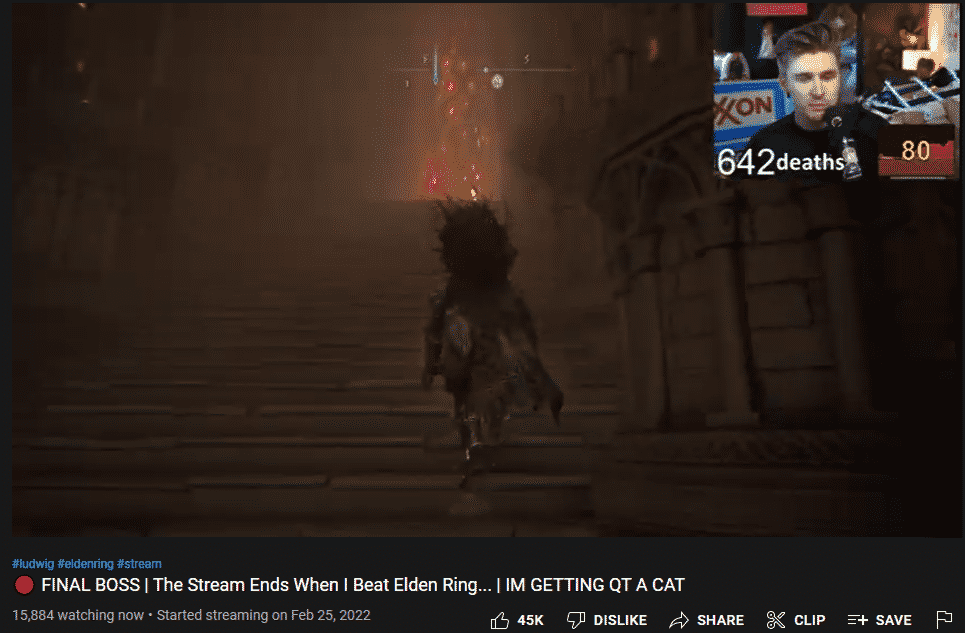 Ludwig is renowned as the most subscribed-to streamer recognized for his video game-related content as well as non-video game-related entertainment such as gambling, contests, and gaming shows. Among the games he enjoys playing are:

Ludwig Net Worth – How They Made Money

Ludwig estimated net worth is around $6.5 million as of 2022. Despite his enormous success as an internet streamer, Ludwig has accumulated the majority of his fan base in the few last years. The majority of his revenues come from Twitch, where he now has roughly 51k subscribers. Ludwig’s Twitch channel is now the seventh most followed on the platform. But recently, Ludwig has signed an exclusive deal with YouTube and no longer streams or earns money on Twitch.

Ludwig uploads videos to his 2.7 million-subscriber YouTube channel. Ahgren is well-known for making viral YouTube videos while streaming. Ludwig posts nearly twice a day, and his videos have an average of 500k views.

Because Ludwig is a huge streamer who broadcasts to tens of thousands of people every day, advertisers are eager to approach him, and Ludwig is eager to accept their free money in exchange for a logo on his stream and in his bio.

Ludwig has his own merch line called Mogul Moves, which he sells on his website Ludwig.gg. Mogul Moves is extremely popular, and the special goods drops are always completely sold out.

How Much Does Ludwig Earn From Twitch?

Ludwig recently signed an exclusive contract with YouTube. Since then, he hasn’t streamed or earned money from Twitch. But before that, he earned quite a lot of money on Twitch.

Subscribers: Ludwig has 50,000 Twitch followers on average. Ludwig Twitch earnings are estimated $175,000 from subscribers on twitch, assuming he earns at least $3.50 for each sub.

Twitch donations: Someone with Ludwig’s viewership stands to make at least $2000 – $4000 in donations per month.

On Twitch, Ludwig earned a lot of money. This is why YouTube had to spend a large sum of money to get Ludwig’s signature on an exclusive deal.

Unfortunately, we cannot measure channel memberships on YouTube as accurately as we can on Twitch using Twitch Tracker.

If Ludwig had half the amount of Twitch subscriptions, he would still have YouTube earnings of $ 51,275 per month from channel memberships.

Add in contributions and on-stream ads, and we estimate Ludwig earns $60k each month from YouTube streaming.

YouTube Videos – According to Social Blade, Ludwig’s YouTube channel has around 32,000,000 average monthly video views. We believe Ludwig earns $84,000 a month from his YouTube channel, based on the industry average of $3 per 1000 views.

Exclusive YouTube Contract: While we don’t have exact figures on how much YouTube paid to sign Ludwig to an exclusive contract, we can give you an estimate. It is approximately 30M to 35M. Whatever the true figure is, given Ludwig’s popularity, it is most certainly in the eight-figure area. That is, his exclusive arrangement with YouTube has most certainly resulted in the greatest increase in Ludwig’s total net worth thus far.

Being a popular streamer who streams on thousands of people, Ludwig has more brand endorsements and sponsorship deals. A few known brand deals are:

Ludwig is a well-known Twitch streamer who recently landed an exclusive deal with YouTube Gaming. Ludwig’s estimated net worth is more than $6.5 million. While Ludwig’s exact net worth is unknown.

However, others have speculated that Ludwig’s net worth could be substantially higher. When we evaluate all of Ludwig’s revenue streams, his net worth may be as high as $9 million.