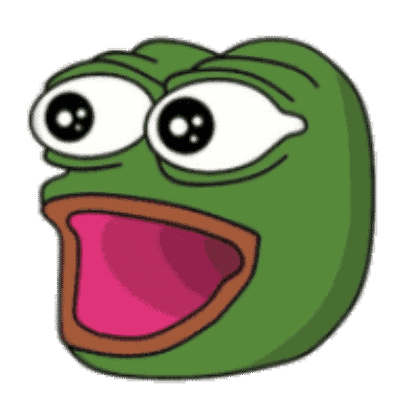 When watching your favorite streamer play a game on Twitch, you may have noticed a certain graphic being spammed whenever there is excitement in chat. If you have seen the Poggers graphic or have seen the word as a comment in chat, you may be wondering about its definition.

You may have also noticed that the term Poggers is often used as a slang term in conversation in both Twitch and gaming communities, even when the specific emoticon related to it isn’t around. The strange word even made it to the Urban Dictionary, which describes it as an “Epic Word” that can be used for anything.

This post will explain Pogger’s meaning, its origin, and its overall place within the gaming community.

The Poggers BTTV emoji is often used on Twitch to express excitement, happiness, or surprise. It is used in the same way that the PogChamp emote is used. The emote is the image of a surprised Pepe the Frog. Most often, it is seen as a positive graphic.

While it is often used when someone does something awesome on a live stream or if something exciting happens in a game, there are other usages. To fully understand what someone means by the expression, read the language around it.

Poggers is the Pepe the Frog version of PogChamp. It is a BTTV graphic and is more popular than PogChamp in some communities (such as the League of Legends community).  It was uploaded on February 23, 2017, to BTTV and has grown in popularity ever since.

The meme has been used outside of Twitch in conversation (to replace other words) and expression. Whether used ironically or when people are excited, we expect Poggers to remain popular for the foreseeable future.

While the frog emotes on Twitch are generally considered separate from the confusion and controversy surrounding the Pepe the Frog meme, it is important to understand the overall meaning of the meme.

Pepe the Frog is a character that was drawn into the comic called Boy’s Club, created by Matt Furie. The character was created in the early 2000s and was one of four roommates who shared their lives together in the pages of the comic. At first, there were several memes based on the character, but they were all innocent enough.

How to Use Poggers in Twitch Chat

While Poggers is one of the most used Twitch emotes, it isn’t actually available on the platform itself. To use it, you will need to either install the FrankerFaceZ Twitch extension or the BTTV plugin.

To use the FrankerFaceZ Twitch extension, all you need to do is connect to the platform with your Twitch account and install the plugin. At that point, you can configure your settings to determine which emotes can appear where on Twitch. You can also upload up to 25 of your own custom emotes (50 if you purchase a one-time donation of $5 USD).

You can also add Poggers and other popular emotes on Twitch by using the BTTV extension. This plugin works in a similar way to the FrankerFaceZ Twitch extension. You can easily download and install the extension to your favorite browser, then sign in with your personal Twitch account. At that point, you can search for Poggers to use in chats all over Twitch.

Poggers is based on the Pepe the Frog meme and the PogChamp emoticon. While PogChamp is a Twitch global emote, you will need to use the BTTV extension in order to use the others. Here are a few similar emotes:

Want to learn more about this surprised emoji that basically expresses shock and excitement? Beyond Poggers’ meaning and its traced origins, here are some other commonly asked questions about how you can express these memes on Twitch.

Why is Poggers Not a Twitch Emote?

The platform is very selective on what they make one of their popular emotes on Twitch. That being said, Poggers has never been on Twitch and likely never will, possibly due to the other ways the Pepe meme has been used. The only way you can use Poggers and similar emoji on the popular streaming platform is through third-party extensions.

Poggers was released on February 23, 2017. Twitch users can see it and use it if they install the BTTV extension to their browser.

Why Can’t I See the Poggers Emote on Twitch?

Not being able to see the Poggers image on Twitch is likely because you don’t have the BTTV extension installed on your browser. Once it is installed, you’ll be able to see and use hundreds of unique emotes on the platform. That being said, you will still be able to see the word “Poggers” being spammed in chat. Unfortunately, there is no way to currently use or see these emotes if you are using the Twitch mobile app.

Does Poggers Have Anything to Do with Pogs?

Not really, but indirectly yes. Poggers was named after the original PogChamp based on a video of Gootecks and Mike Ross. In another video with the two, they played the 90’s game Pog, which is where the name “PogChamp” originated after Gootecks became the Pog champion.

Pog champions is a term reserved for people who have mastered the game Pog. In this game, players take turns stacking tiny circles on top of each other and hitting them with a heavy disc. While the term Poggers doesn’t relate to the game, it has made its way into the world of Twitch streaming through the emote that portrays excitement.

While the streamer had his own dedicated Twitch emote (of himself making a surprised face), the emote was replaced after Gootecks tweeted support for the capital raid in early 2021.

Can I Upload Poggers as a Personal Emoticon for My Twitch Channel?

You cannot use Poggers as a custom Twitch sub emote for your Twitch chat. It is a well-known and well-documented image and its usage is limited to the extensions. Due to their rules for submitting Twitch emotes, you would not be able to upload the emote as your own.

While Poggers is a slang term that generally happens when something exciting occurs, it can take on almost any meaning within the world of Twitch. Use this awesome emote of the surprised-looking Pepe with big eyes.

There is inexplicable love for both the emote and the word in both Twitch and gaming communities. We expect that it will continue to grow in popularity over time as more users share the phrase with their friends.

So if you were wondering, “What does Poggers Mean?” we hope we have been able to explain both the character and the word to you, that way you can use the amazing emote without worry.