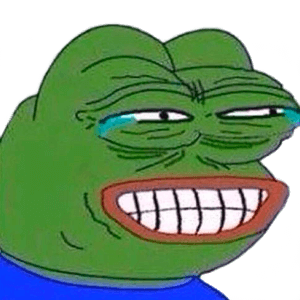 The PepeLaugh emote is often accompanied by the phrase “Here it comes.” It is used as a laugh emote similar to LUL or the crying laughter emoji due to the image’s teary eyes.

PepeLaugh is an emote that is part of the “Pepe emote” family that is based on the comic character Pepe the Frog. You can use it and see it if you add the BTTV extension to your Twitch account.

It was originally used on 4chan in 2014, but was uploaded to FrankerFaceZ in 2017 and grew into a popular emote on Twitch from there. It is commonly used as a laugh emote in the same way that crying laughter emojis are used everywhere. Often, it is accompanied by the term “Here it comes” in moments where laughter is anticipated.