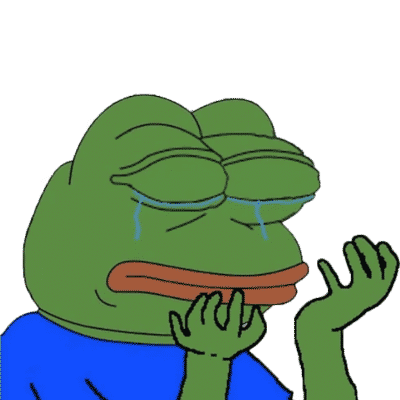 While watching your favorite stream, you have likely noticed the Pepehands emote appearing through the chat. This popular emote is often used on a channel when people are feeling a little sad or down. But where did this emote come from and what does it mean?

The PepeHands emote is used on Twitch when a user is trying to signify sadness (or pretending to be sad) or when the streamer seems upset about something. It is used in the same ways that a sad emote can be used.

Pepehands is one of many Pepe the Frog family emotes. It started growing in popularity when it was spammed by Forsen’s followers midway through 2017. The phrase/emote is used on Reddit and other forums to indicate sadness.

PepeHands is an image of the Pepe the Frog character originally created by Matt Furie. His hands are up as though creating a shield around his face and he is crying.

Both the PepeHands emote and the term are used online for sadness or depression. An example of its usage is reacting to a streamer’s latest news about a difficult situation in his or her life.

How to Use the PepeHands Emote in Twitch Chat

While PepeHands is one of the most used Twitch emojis, it isn’t actually available on the platform itself. To use it, you will need to either install the FrankerFaceZ Twitch extension or the BTTV plugin.

Both of these tools are third-party extensions allowing Twitch streamers to upload personal emotes relatable to their communities. While these emotes typically stay within the streamer’s audience, a few of them spread and become viral across the Twitch platform or on other social sites (especially in esports circles), such as Twitter or Reddit.

To use the FrankerFaceZ Twitch extension, you must connect to the platform with your account and install the plugin on your browser. At that point, you can configure your account settings to determine which graphics can appear where on Twitch. You can search through many emojis on the site, including dozens of others based on the Pepe the Frog character.

You can also add PepeHands and other popular emotes on Twitch by using the BTTV extension. This plugin works in a similar way to the FrankerFaceZ Twitch extension. You can easily download and install the extension to your favorite browser, then login with your personal Twitch account. At that point, you can search for this popular emote and many variations to use in chats all over Twitch.