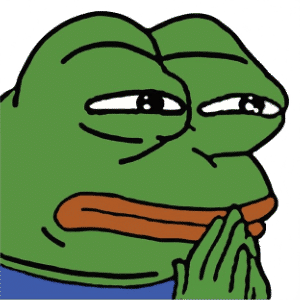 MonkaHmm is one of the many popular emotes on Twitch based on MonkaS and the Pepe the Frog character. It is available as a FankerFaceZ and BTTV emote. MonkaHmm is used when someone is expressing that they are thinking about something or contemplating a decision.

MonkaHmm is an emote that is part of the “Pepe emote” family that is based on the MonkaS emote. You can see both if you add the BTTV extension to your Twitch account.

As a Pepe the Frog emote, it has gained a lot of popularity since its released and you will encounter it often on Twitch when someone is considering something or if the streamer seems confused or thoughtful.

MonkaHmm and other emotes based on Pepe that are used on Twitch are generally considered separate from the confusion and controversy surrounding the meme.

Pepe the Frog is a character that was drawn into the comic called Boy’s Club, created by Matt Furie. At first, there were several memes using the image, but they were all innocent enough.

In 2016, Pepe was adopted by the alt-right movement and white supremacists and was used in hate-related content. Furie was frustrated that the character was being used as a hate symbol.

How to Use the MonkaS Emote in Twitch Chat

While the MonkaHmm emote is one of the most used emotes on Twitch, it isn’t actually available on the platform itself. To use it, you will need to either install the FrankerFaceZ Twitch extension or the BTTV plugin.

To use MonkaHmm on the FrankerFaceZ Twitch extension, all you need to do is connect to the platform and install the plugin. At that point, you can configure your account settings to determine which emoji can appear where on Twitch. Search for MonkaHmm to start using the emote.

You can also add the MonkaHmm emote by setting up the BTTV extension. You can easily download and install the extension to your favorite browser, then join with your personal Twitch account. At that point, you can search for this popular emote and many variations to use in chats all over Twitch.

If you use Twitch a lot, you may notice that many frog emotes. One of the most popular is MonkaS, which is similar to MonkaHmm. While MonkaS is an example of an emote whose meaning is anxiety, MonkaHmm is an example of contemplation.

Whether you are a streamer or a user, you should understand the culture of the Twitch website. Understanding the origin and meaning of the best emotes will allow you to share them in any chat.