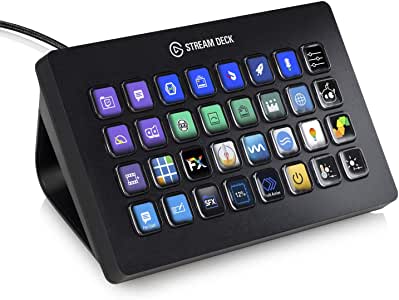 When I first ordered my Elgato Stream Deck in early 2020, I knew it would be a cool gadget, but I had no idea how it would make both works and play that much easier.

Not only does the stream deck make it easy for you to switch scenes, play Twitch sound alerts, and mod your stream all at the push of the button, it can also help you in your editing software, keeping track of your metrics, or even timing how long you will need to work on a project.

This post will go over the perks of owning an Elgato Stream Deck and what it can offer you.

The Elgato Mobile edition includes the full functionality of the physical edition and, in fact, you can transfer your software settings to a “real” stream deck if you upgrade in the future.

The mobile edition comes with 15 multi-action keys that you can set or create folders with. You can still use any of the widget keys from 3rd party apps. You can use it on either iPhone or Android that operates on a local network, allowing it to be wireless.

The price to use the mobile edition is $2.99 monthly or $24.99 annually. There is currently no lifetime license, though they do offer a 1-month free trial.

Owning an Elgato Stream Deck allows you to create custom hotkeys that help you manage your steams and any other projects. In fact, you can create multiple profiles for the same deck so you can switch from streamer-mode to editor-mode to work-mode at any time.

The Stream Decks are compatible with each other as well, so if you start out with the 6-keyed mini version, you could eventually upgrade to the 15 key and use both simultaneously, giving you 21 keys. You don’t have to necessarily cut your hotkeys down to a certain amount of buttons though, as you can create folders that you can access instantly.

While you can set up your hotkeys manually, the platform also has built-in widgets from popular streaming platforms such as Streamlabs to make things even easier to set up.

The other nice thing about the Elgato stream deck is that you can customize it anyway you wish. You can add your own graphics – both animated or static – and create a set up that is visually appealing to you.

You can find several stream deck icon packs online, but here a couple of my favorite:

The Elgato stream deck is a great tool that will not only improve the overall quality of your streams, but it also has so much additional utility to it. The versatility will help you both improve and speed up everything you do at your computer.